Home About Beth and Scott

About Beth and Scott

About Beth and Scott

30 Years of Experience and Going Strong!

Beth and Scott Bierko, the owners and principal performers of Beth & Scott and Friends, are a husband and wife team of award-winning, singer-songwriters and arts-in-education specialists specializing in social-emotional learning (SEL). Since 1993, Beth & Scott have performed thousands of cultural arts programs including school assemblies, camp and library concerts and interactive workshops for children. They are parents of two daughters, Helen (28) and Steph (23).

Beth Bierko, actress, singer, yoga teacher and comedienne, began performing in musical theater productions at the age of 14 in her hometown of Norristown, Pennsylvania. She earned a college degree in Communications and Theater from Temple University in Philadelphia. After college, Beth moved to New York City and completed intensive actor-training programs at The William Esper Studio, The National Improvisational Theater and The Actor's Movement Studio. Beth is a Certified Kripalu Yoga Instructor and the former Director of The Rivertown Center for Yoga & Health in Dobbs Ferry, NY.

Scott Bierko, actor, singer, musician, laughter leader, sound designer and music producer was raised in Rye Brook, New York, and began acting, singing and playing guitar at the age of eight. Scott started his professional music career at the age of 17 and received a degree in English from Franklin & Marshall College. Scott worked briefly as a music teacher for grades K-8 at a private school in Manhattan. He is a former board member of The Children's Music Network. His brother, Craig Bierko, is an actor often seen on television, in films and in theater. 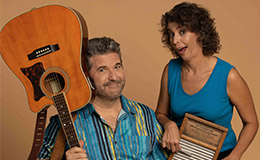